Cooperation with the OSCE 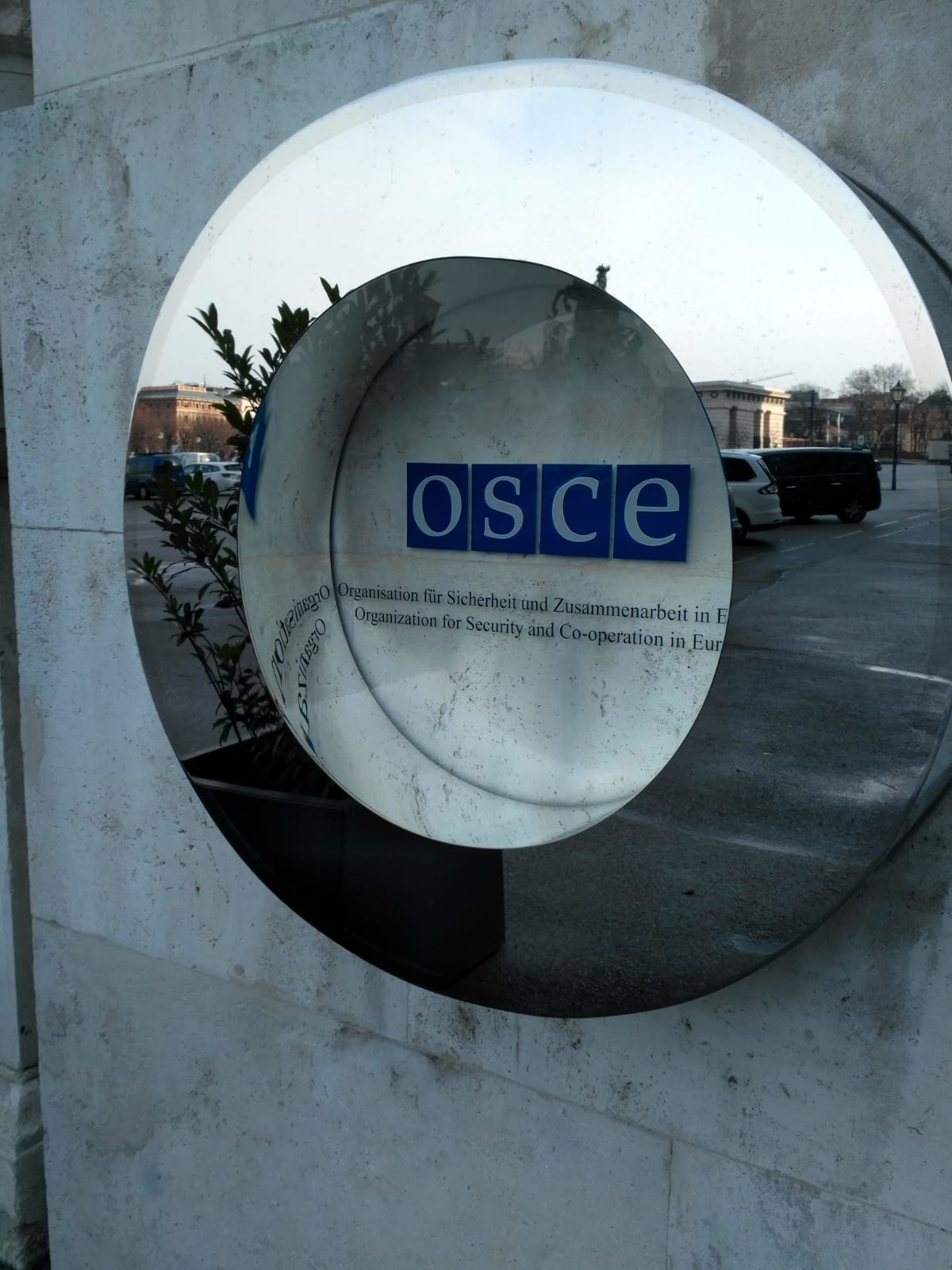 The Organization for Security and Cooperation in Europe (OSCE) is the world's largest regional organization, which consists of 57 participating States, including all European countries, the CIS states, the US and Canada. 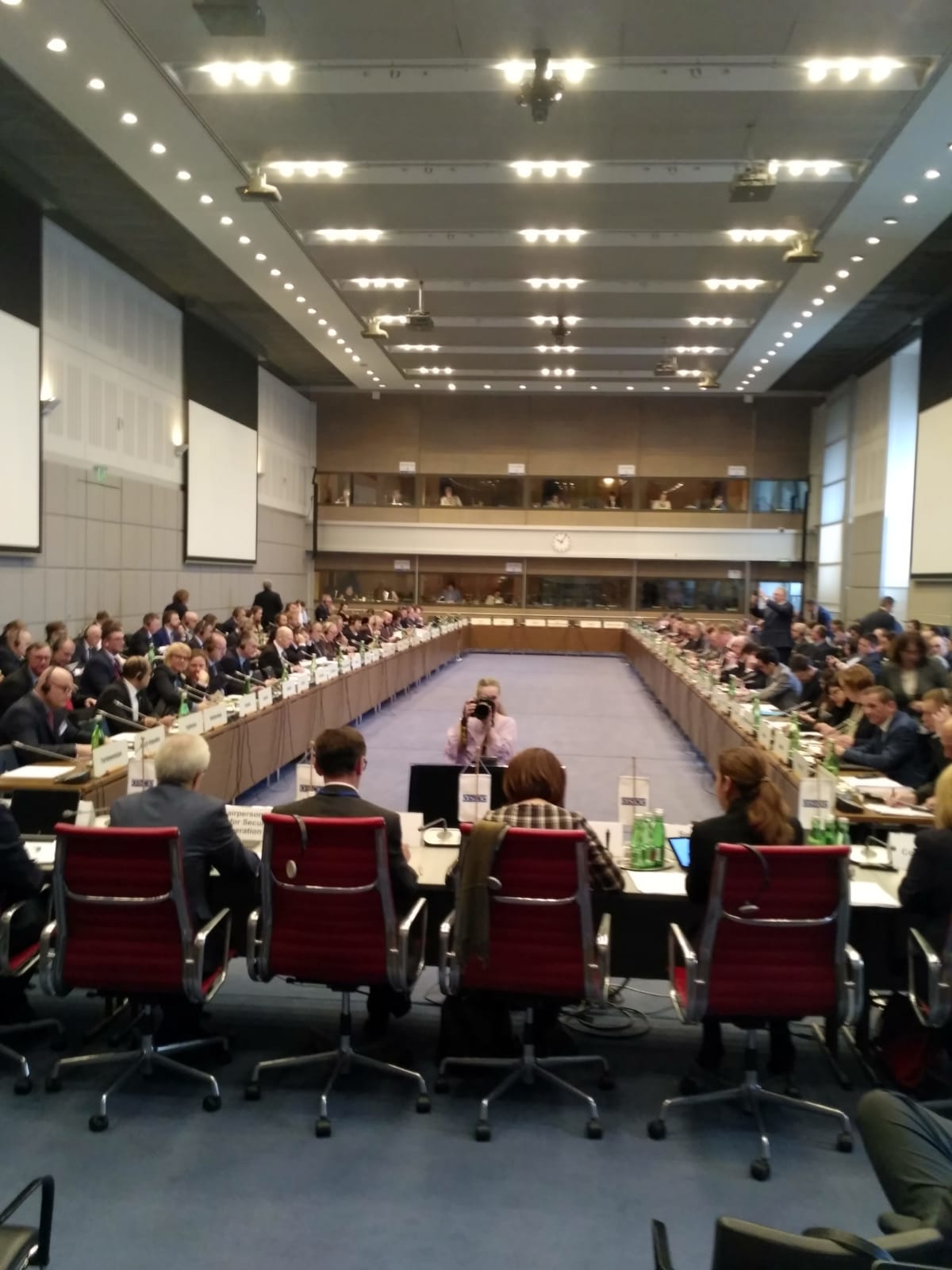 The OSCE mandate covers a wide range of issues within the politico-military, economic and environmental, and human dimensions: combating terrorism, arms control, confidence and security-building measures, ensuring economic and environmental security, development of democratic institutions, rule of law and protection of human rights. All decisions within the OSCE are taken by consensus. All participating States have an equal status.

The OSCE comprehensive approach to security and a wide range of participants make the Organization an important and unique international forum for political dialogue.

The Republic of Belarus has been a full-fledged member of the OSCE since January 30, 1992 having its Permanent mission to the OSCE in Vienna. 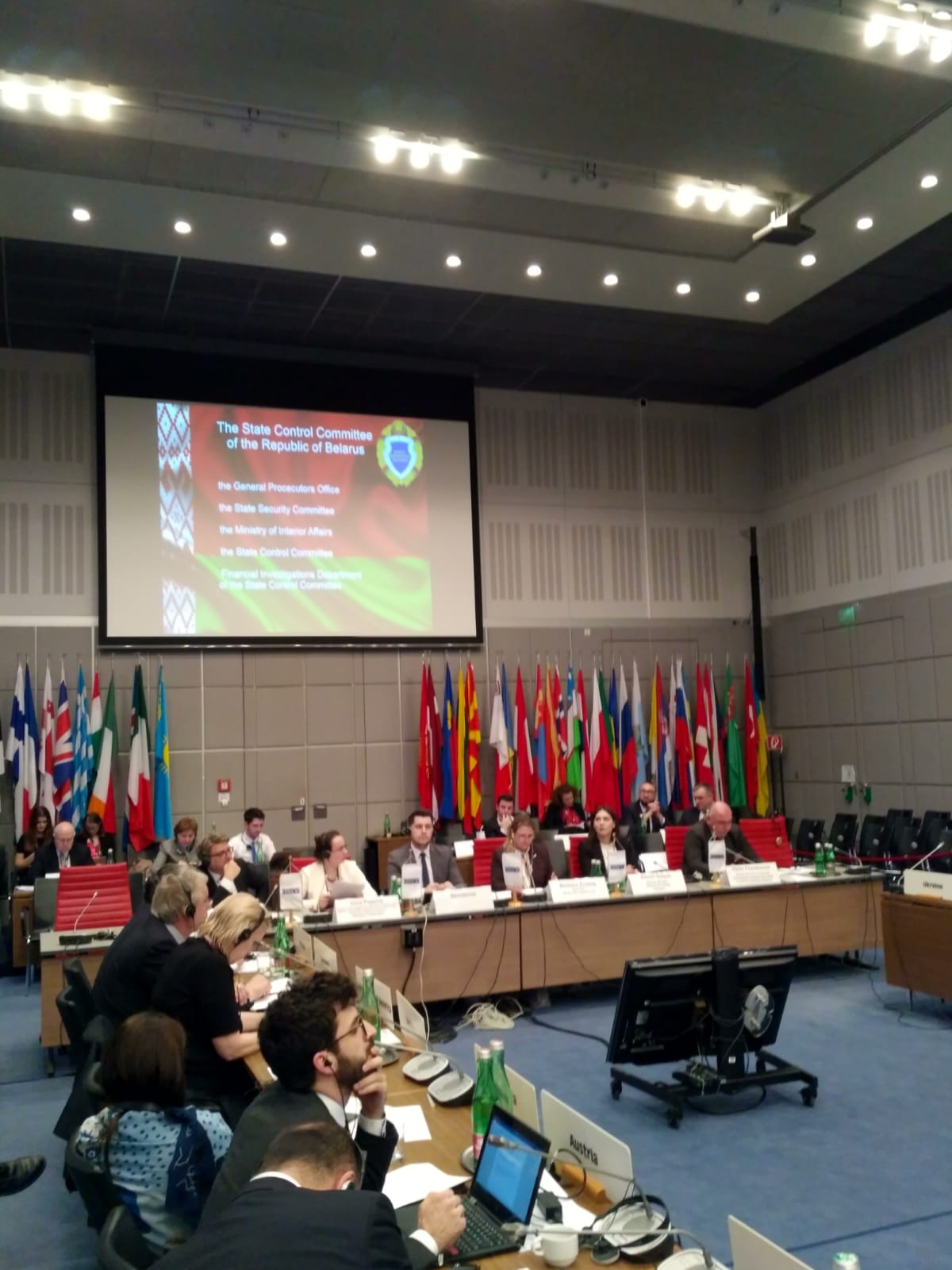 Belarus actively participates in the processes of elaborating and adopting OSCE decisions and documents, thus making its contribution to the development of the common European dialogue on security and cooperation issues.

Belarus takes an active part in the meetings of the OSCE Ministerial councils, in the work of  its main executive and subsidiary bodies: the Permanent Council (PC) and its committees, the Forum for Security Cooperation (FSC), as well as the Joint Consultative Group (JCG) and the Open Skies Consultative Commission (OSCC), which are the negotiating bodies for the Treaty on Conventional Armed Forces in Europe and the Open Skies Treaty respectively.

The Republic of Belarus successfully chaired the following OSCE bodies: the OSCE FSC in April-August 2005; the OSCC in September-December 2008 and January-April 2020; the Economic and Environmental Committee of the OSCE’s PC in 2010; the Third Conference to Review the Implementation of the Treaty on Open Skies in June 2015; the JCG in January — March 2016.

Since September 2014, Belarus has provided a platform for meetings of the Trilateral Contact Group on Ukraine and its four working groups, which are regularly held in Minsk (in 2020, in connection with the COVID-19 pandemic, the meetings were held in a virtual format).

Representatives of Belarus take part in the meetings of the Minsk Group within the framework of the negotiation process on a peaceful settlement of the conflict in Nagorno-Karabakh. In March 2015 and June 2018, country visits to Belarus of the OSCE’s Minsk Group Co-Chairs and the Personal Representative of the OSCE Chairman-in-Office for Nagorno-Karabakh were organized.

Representatives of Belarus work in the OSCE Secretariat, institutions and field missions, including the Special Monitoring Mission to Ukraine and the OSCE Observer Mission at the Russian checkpoints Gukovo and Donetsk on the Russian-Ukrainian border. Since July 2016, a representative of Belarus N.Drozd has been heading the OSCE Office in Ashgabat. Since March 2020, E.Kupchina has been the OSCE Coordinator on transnational threats.

Belarus interacts pragmatically and constructively with the OSCE Secretariat and institutions. In 2018, OSCE Secretary General T.Greminger visited Belarus three times. The OSCE Representative on Freedom of the Media H.Desir and the Director of the OSCE/ODIHR I.Gisladottir paid visits to Belarus in March 2019 and in February 2020 respectively.

The delegation of the National Assembly of the Republic of Belarus takes an active part in the work of the OSCE Parliamentary Assembly (PA). In 2011-2014, OSCE PA adopted resolutions initiated by f Belarus on the topics of combating human trafficking, new and renewable energy sources, “green” economy, protection and promotion of socio-economic rights in the OSCE area. 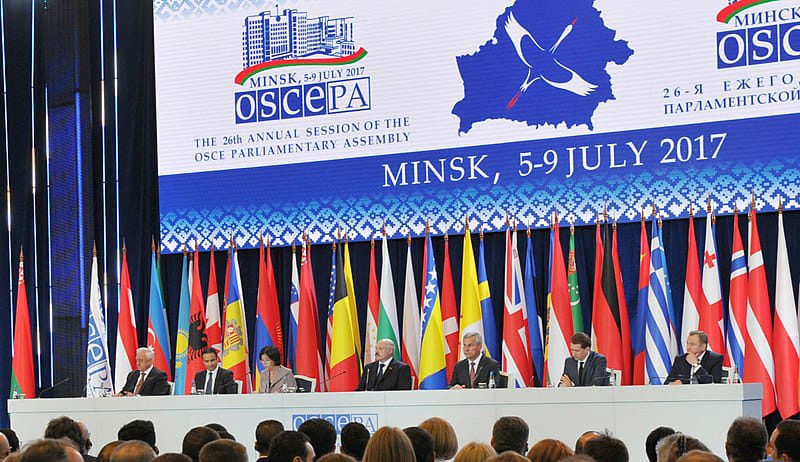 On July 5-9, 2017 Minsk hosted the 26th Annual Session of the OSCE PA which was devoted to strengthening mutual trust and cooperation for peace and prosperity. The Minsk declaration of the OSCE PA contained resolutions adopted at the annual session, including the resolution “Developing timely and effective legislative, regulatory, administrative responses to emerging new psychoactive substances” that was initiated by the Belarusian side.

The final declaration of the 27th session of the OSCE PA in Berlin (July 2018) included the resolution “Promotion of digital economy in the interests of ensuring economic growth in the OSCE area”, initiated by the Belarusian delegation. The Belarusian resolution “Strategic forecasting in science, technology and innovation for sustainable development” was also adopted at the 28th OSCE PA session in Luxembourg (July 2019).

On April 29-30, 2019 Minsk hosted an international parliamentary conference of the OSCE PA’s Silk Road Support Group “One Belt, One Road: Deepening Cooperation for Sustainable Development and Prosperity” with the participation of the Assembly’s President, G.Tsereteli. 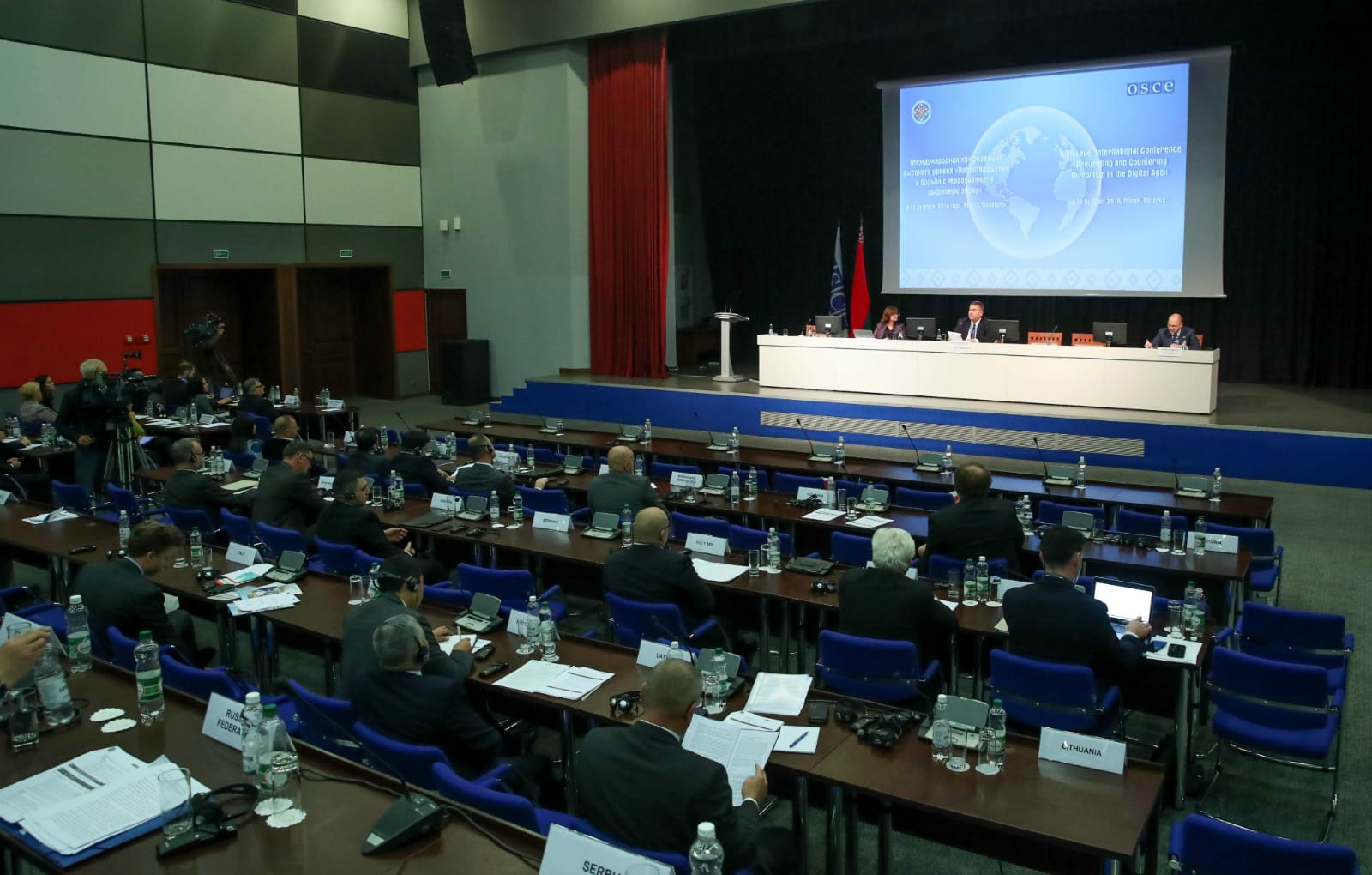 Minsk is being actively chosen as a site for OSCE events of various formats. In October 2018, a high-level OSCE international conference “Preventing and Combating Terrorism in the Digital Age” was held in the capital of Belarus. In 2019 alone, Minsk hosted three OSCE regional seminars: on the implementation of UNSCR 1540 (April), on the deactivation of small arms and light weapons (April), on the impact of new information and communication technologies on combating trafficking in persons (July), as well as a seminar on paperless trade and single window development under the OSCE Project “Promoting economic connectivity in the OSCE” (March).

Belarus supports the priority role of the OSCE in conflict settlement within its area of responsibility, stipulated by the Charter for European Security, based on the respect for sovereignty and territorial integrity of the participating States.

The Republic of Belarus is interested in a wider use of the scope and potential of the OSCE with a view to strengthening security in the OSCE area and to creating favourable conditions for the development of cooperation.

Belarus traditionally positions itself as one of the most active and consistent supporters of a transformation of the OSCE into a full-fledged efficient international organization, acting in the interests of all participating States.

Poland and North Macedonia will chair the Organization in 2022 and 2023 respectively.