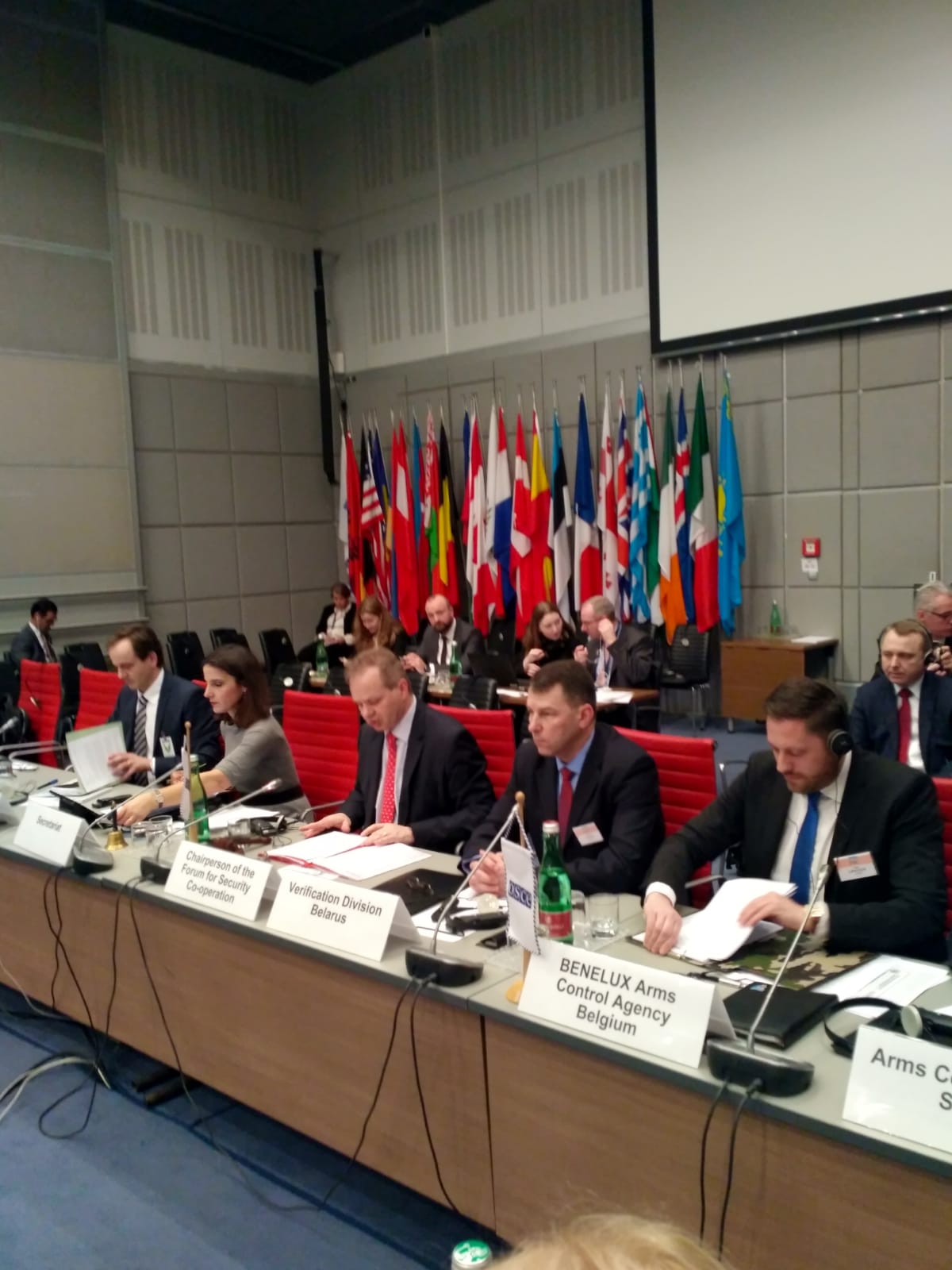 The OSCE Forum for Security Co-operation (FSC) was established in accordance with the provisions of the Helsinki Document 1992 of the Conference for Security and Cooperation in Europe (now the OSCE). Its mandate covers the following main tasks: negotiations on arms control, disarmament and confidence- and security-building measures (CSBMs), as well as regular consultations and active co-operation on security-related issues and further reduction of conflict risks. The FSC is one of the OSCE's authorized decision-making bodies.

In 1990s the Forum negotiated and adopted a number of significant documents and decisions in the field of arms control, disarmament and CSBMs:

♦ Principles Governing Conventional Arms Transfers, which fixed the commitments of the participating States to transparency and restraint with regard to transfers of conventional arms and related technologies;

♦ Stabilizing Measures for Localized Crisis Situations, which outlined a list of voluntary measures, significant in military terms and aimed at supporting political settlement of these situations and facilitating the decision-making process by the relevant OSCE institutions;

♦ Global Exchange of Military Information, which covers information on major weapon and equipment systems and personnel of land troops and all other forces of the OSCE participating States based both within their territories and the territories of the third countries;

♦ OSCE Principles Governing Non-Proliferation, which fixed the readiness of the participating States to support international regimes of non-proliferation of nuclear, chemical and biological/bacteriological weapons and reflect the relevant commitments in their national legislation, policies and procedures;

♦ Code of Conduct on Politico-Military Aspects of Security, which contains the main principles and political commitments undertaken by participating States. The fundamental principle of indivisible security and inseparable link of security of each state with security of others is also reflected in the Code of Conduct.

The Vienna Document of the Negotiations on Confidence- and Security-Building Measures has become one of the key OSCE documents in the military sphere, which goal is to encourage more transparency and trust between the OSCE participating States through the exchange of information, notifications and verification (inspections and evaluation visits). The Vienna Document was repeatedly updated by the FSC with the aim of bringing it in conformity with the changes of politico-military environment in the zone of application. The Vienna Document 2011, which entered into force on December 1, 2011, is the logical continuation of the Stockholm Document 1986 and the Vienna Documents 1990, 1992, 1994 and 1999.

In 2000 the FSC negotiated and adopted the OSCE Document on Small Arms and Light Weapons (SALW), which aimed at combatting the destabilizing accumulation and uncontrolled proliferation of this type of weapons.

In 2003 the FSC adopted the OSCE Document on Stockpiles of Conventional Ammunition (SCA), which addresses the problem of surplus of conventional ammunition and the explosive materials for it.

Based on OSCE documents on SALW and SCA, OSCE projects are implemented to assist participating States in SALW and SCA destruction and stockpile management.

The OSCE projects on improving the security of SALW storage and stockpile management and on eliminating stocks of liquid rocket fuel (melange, samin and TM-185) were implemented in Belarus in the course of last 15 years.

Significant attention within the framework of the Forum is paid to the problem of non-proliferation of weapons of mass destruction. In December 2013 in the margins of the OSCE Ministerial Council in Kiev the FSC adopted a decision on the update of the OSCE Principles Governing Non-Proliferation. The contribution of Belarus, Kazakhstan and Ukraine to nuclear disarmament and the strengthening of international peace and security was reflected in the preamble part of the Principles.

In 2015, at the initiative of Belarus the Forum adopted the decision “The OSCE’s Role in Support of the Implementation of the UN Security Council Resolution 1540”, which defines the main avenues of the OSCE’s activities in the implementation of resolution 1540 and lays the groundwork for cooperation with other international organizations on this issue. In 2019, the OSCE Ministerial Council in Bratislava adopted a Commemorative declaration initiated by Belarus and Spain on the occasion of the 25th anniversary of the adoption of the principles governing non-proliferation and the 15th anniversary of UNSCR 1540. 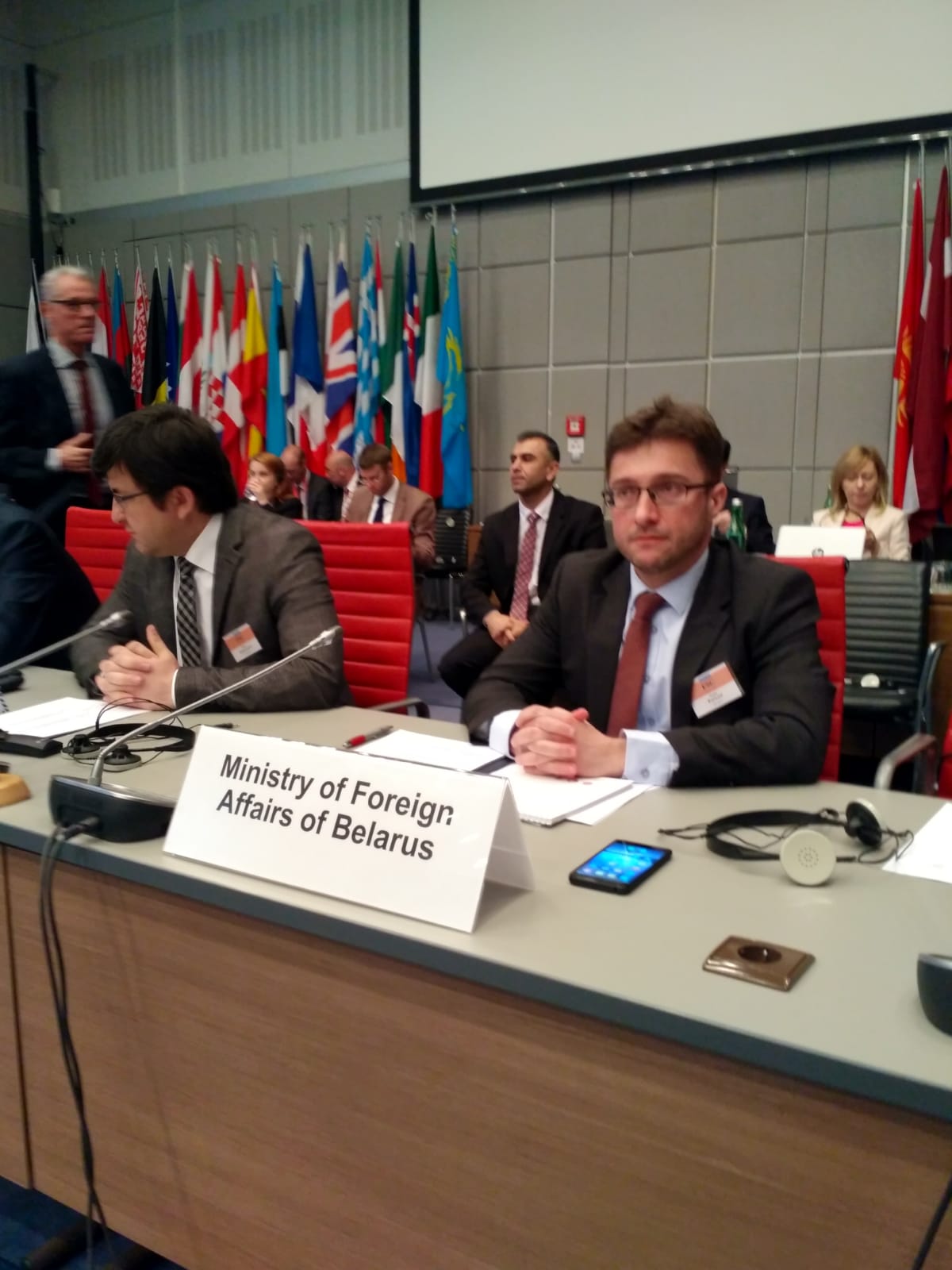 Representatives of Belarus make active contribution to the FSC work through participation as key-note speakers in the Forum’s events.

In 2019, Minsk hosted two regional seminars within the OSCE's political-military dimension: on the implementation of UNSCR 1540 and on the deactivation of SALW.

The FSC Chairmanship is carried out on a rotational basis; the term of each chairmanship is four months. The Republic of Belarus chaired the FSC in April-August 2005.

In 2022 the Forum will be chaired by the Azerbaijan, Belarus and Belgium.